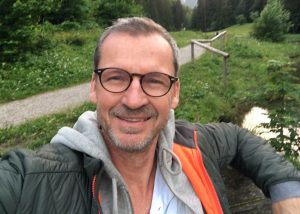 Music was perhaps my most important inspiration even as a small child of around four or five years old. Responsible for that: My much older neighbour. He was so nice and introduced me to the little boys, the great beats rocking from the radio: the Stones, the Beach Boys, the Tremeloes and Troggs, the wild Who and the ingenious Beatles.

This was already the first step to becoming a music nerd. At the age of six I bought my first Stones singles, at nine I saved up for a Jethro Tull album, at twelve I bought Johnny Winter – used but in good condition. It was followed by the Allman Brothers, Alice Cooper, UFO, Herbie Hancock. So it went on. Rock, hard rock, blues, jazz … Of course I also started to play instruments. First drum, then drums, later guitar was added. And of course I also dreamed of becoming a professional musician. Fortunately, I realized that I had neither the discipline nor the talent to do it, relatively early on. Anyway, early enough to be able to go far as a music journalist. It was: the ideal alternative. So on the one hand I could bring in my accumulated knowledge, on the other hand I could get as close as possible to my music stars who had been admired since my earliest childhood. About 1000 interviews and countless albums and songs belonged later, I start now this Blog. Personally, subjectively and with the hope that some pearls will shimmer a bit brighter in public in the future.